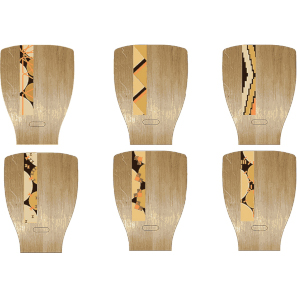 Winter reading included a revisit of Gareth Williams ‘The Furniture Machine – furniture since 1990’ (V&A publications 2006) which reminded me of the giant forces that are out there influencing taste in furniture. This book tracks the development of several celebrity designers, who Williams terms as part of an egosystem, and have design thinking. Take Jurgen Bey and his tree trunk bench at €12,500. He was experimenting with the meaning of furniture rather than the practicalities of it. He made a statement that it is ridiculous to transport trees when they are available locally, so you only get three bronze chair backs for your money.

Gaetano Pesce made a piece that fulfilled all the demands of furniture in a new family home. Child proof, colourful, comfortable and easy to move. Donna is a polyurethane foam product made at a time when pop art was at its zenith and new materials in vogue. In fact this one came virtually flatpack – it could be vacuum compressed to only 10% of its volume. Manufactured by Cassina and Busnelli in 1969 with a reissue in 2000 it featured in Big Brother in 2002.

Continuing to explore the design possibilities for Attentive, there are now six different backs, designed as part of a set for a kitchen table and with continued influence from the Omega workshops of Christopher Fry, Bauhaus and from Mediaeval Spain. The Alcazar Palace in Seville had some stunning images, crafted in wood and ceramics, the source of three of these backs. The veneers and copper for Attentive are cut by Laser through Heritage Inlays in Brighton.

Technology plays its part in progressing design and I’m sure is one of the forces that Gareth Williams talks about.